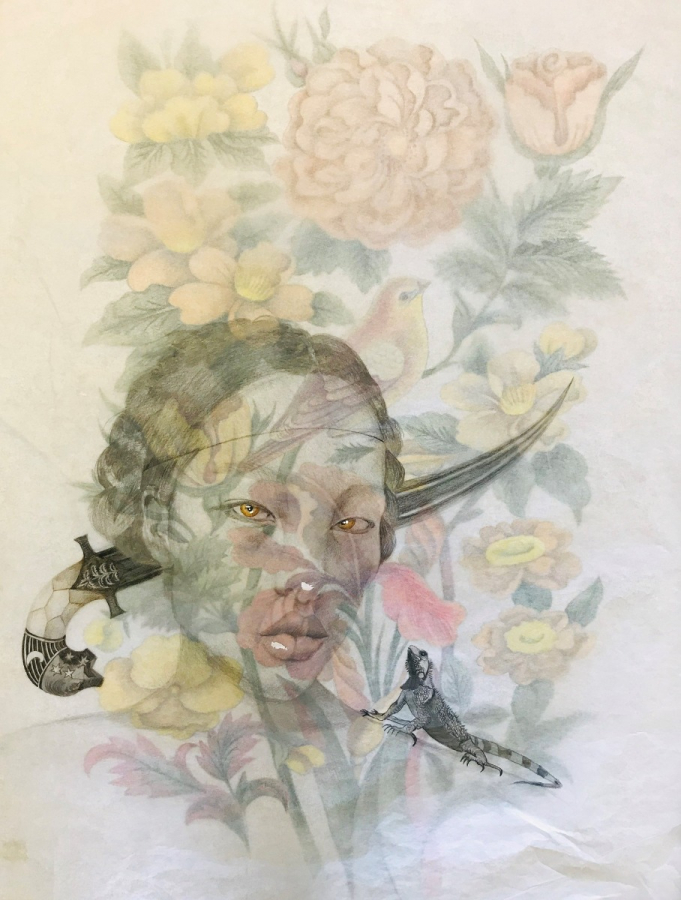 Early Renaissance and mysterious medieval paintings have always fascinated me.
Collecting some images from the medieval and Renaissance period, particularly Bonezzo Gozzoli’s and Andrea Mantegna inspired me in this series.

Fantasy series, like all other my projects, is developed by gathering the information and images found from Google search based on free associations, dreams, fears, curiosities, love and dreads.

The project is a mind collage, created by assembling non-relevant images together.

By collecting memories and fantasies, then patching the fragmented symbolic cultural elements, these works have emerged. The aim is showing the connection between present and past in a mysterious way. and also there is a nostalgic feeling in the whole finished painting which is about the past whether East or West.

Each work has two layers, the first layer is a landscape, inspired by European  Renaissance period and the second layer which is on Japanese rice paper might be inspired by East Asian or Persian old painting or even contemporary design and fashion industry mixed with my nightmares  about insects. The figures and animals on the second layer, are apart from the surroundings. They mostly appear flat and two dimensional. Their smooth curviness, miniaturist, lissome dance notwithstanding, they are much like shadow puppets, whose being is determined by their distance to the source of light. The puppet look characters exist, like shadows in the global theater stage.

Shipping will be done safely by ALANGOO Fine Art. For any questions please contact us at fine-art@alangoo.com

More from this Artist